Are you baffled as to why Donald Trump is so popular?

But more than that,

I’ve figured out how you can turn his moves on their head to help your businesses and nonprofits get tons of attention, leads, and sales (without alienating masses).

Before I give you three solid strategies…

Love him or hate him, I need to give you a bit of a set-up on Trump:

Trump slammed Senator John McCain for being a prisoner of war in the Vietnam War, “You call him a hero because he got captured. I only like people who didn’t get captured,” to audible gasps in the audience. This is while Trump himself got FIVE deferments to avoid serving in the war himself.

Most of us cringed, yet…

During a televised debate he made reference to the moderator’s menstrual cycle to deflect from a tough question by making it seem she was irritable.

I could go on with a dozen examples, but will wrap up with this: Trump said, “I could stand in the middle of 5th Avenue and shoot somebody and I wouldn’t lose any voters.”

His popularity spiked yet again.

Here are three of the four reasons why he seems to be made of Teflon that YOU CAN USE to get more leads, donors, and sales.

(The fourth reason is so dark; I’m not even going to give it the light of day here.) 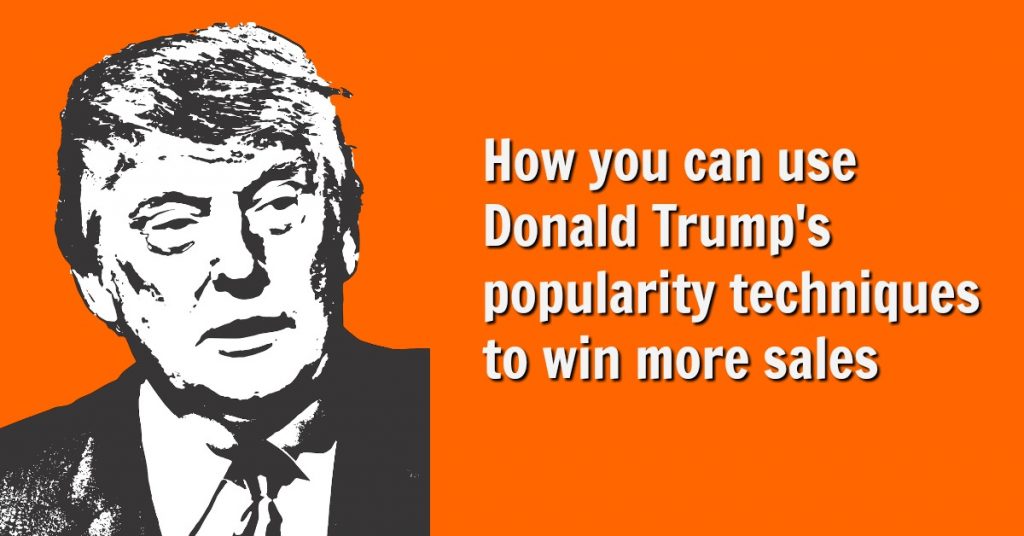 1. He touches a nerve when he says things that people are afraid to say out loud, even if you don’t agree with him

I watched a reporter ask attendees at a veterans rally this past weekend about the McCain slam and that Trump fudged on the amount of money he’s raised for veterans.

Their response was, “I don’t support any of that nonsense, but ‘he tells it like it is and I like that.'”

His candor has become such a relief in a BS-speak world that increasingly feels overly politically correct.

You can touch that nerve in a positive way.

People are genuinely attracted to his candor.

One of my favorite Declan O’Flaherty quotes is: “If you can give voice to what I privately believe or fear in my heart but won’t say, I’ll trust you forever.”

It is been tested that when you really understand your buyers or donors deepest fears and aspirations, and give voice to them, you earn their trust and respect.

If you say to a person who needs to lose weight, “I want to lose weight without giving up chocolate, how about you?” You’ve got … err I mean them.

When I say to my audience….

Does it feel like your email goes into a black hole?

You hate to write.

You don’t know what to write about.

There are too many social media platforms to keep up with.

They know I get them (cause I’ve felt every one of these things)… and I’ve earned the right to keep talking.

Which brings us to…

We all LOVE and crave “simple” even if they know Trump is wrong.

This is a lesson I struggle with because “simple” is hard.

Instead of limiting your diet to 1,700 calories, give up soda. That’s a simple step. Anyone who has lost massive amounts of weight will tell you they did by taking simple baby steps that add up over time.

Give your buyers or donors baby steps to work up to big change or big purchase.

Once you’ve hooked ’em and developed trust, you’ve earned the right to move to more complex solutions, or bigger purchases.

#3 People profoundly mistrust the political establishment and the media

His popularity goes up a tick.

Data shows that Trump’s favorability rating, while not great, is still better than our trust in the media or political establishment.

What does this mean to you?

A really quick win lies in being counter-establishment with your communication, mission, services, or product.

But I bet if you think on it, you can generate some attention, leads, and even sales from tapping into a profound anti-establishment sentiment.

What the political establishment doesn’t want you to know

How to beat the big boys at their own game

The [story][solution][service][mission] before the media gets it wrong

The hidden story behind…

Why Congressional deadlock can work in your favor

So there you go.

Give it a try.

Let me know how it goes.